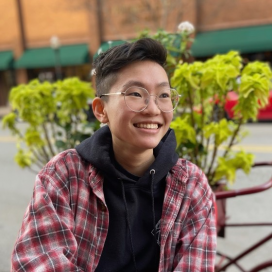 Danny Khor (they/them/他) is a queer trans first-and-a-half-generation immigrant who grew up in Penang, Malaysia and Tampa, Florida. Their interest in marine conservation was sparked as a young child by witnessing the rapid progression of coral bleaching and sea level rise, the prevalence of plastic in the ocean, and the impacts of these changes on local ecosystems. Danny attended the University of Florida, where they graduated with a Bachelor of Science in Marine Sciences and a minor in Zoology in spring 2021.

While at UF, Danny was able to pursue a wide variety of opportunities in marine conservation which included a manatee management project with the Crystal River National Wildlife Refuge, identifying cold-water coral and sponge habitats in the Gulf of Mexico, and working as a curatorial assistant for the second-largest ichthyological museum collection in the U.S. An REU program with the Southeast Alaska Tribal Ocean Research Network in Danny's sophomore year of undergrad introduced them to how viscerally and monumentally important the preservation of environmental resources is to human lives, and how climate change is having disproportionate effects on Indigenous communities and other disadvantaged groups that rely on the ocean for sustenance, livelihoods, and cultural touchstones. These experiences were formative lessons on the importance of environmental justice and stewardship, and reinforced Danny's dedication to helping create an equitable and healthy future.

Danny spent their first year of the RAY Fellowship as an Antarctic Program Biologist at Point Blue Conservation Science, working on a long-term Adélie penguin ecology project. They spent 79 days at a small remote field camp at Cape Crozier, Ross Island learning how to walk on ice, how to band penguins, and how to code on the fly. Danny transferred to Ocean Conservancy in the second year of their fellowship, and is now working with the Science Team to provide support to Ocean Conservancy's conservation programs, learning how to implement alternatives to traditional Western conservation, and helping to build OC's Indigenous-led marine conservation portfolio.

In their free time, Danny can usually be found longboarding around town, reading, scouting new dive sites, and spending time with their friends.