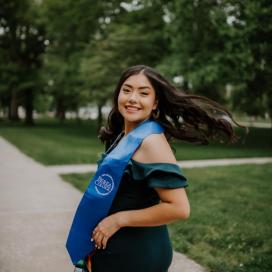 Berenice Davila Gonzalez is a first-generation immigrant from Coahuila, Mexico whose family immigrated to the United States when she was three years old. The daughter of a butcher and a domestic worker, her parents instilled in her a love of the environment and respect for all work. Having been raised in the Texas Gulf Coast – a region with an economy reliant on the oil refinery industry and proclivity for natural disasters – she is passionate about environmental justice issues including environmental racism resulting from extractive industry, climate migration, and equitable climate disaster response.

Berenice recently became the first in her family to graduate from college after earning her Bachelor’s of Arts Degree in Political Science from Berea College this May 2021. While in college, she amassed over three years of experience working in policy-advocacy, communications, and grassroots organizing roles at the local, state, and national levels. In Kentucky, she spent two school years working as a campus organizer for the Madison County Chapter of Kentuckians For The Commonwealth where she helped expand voter education access and supported constituents in advocating for pension funding for coal miners suffering from Black Lung Disease. Her work was recognized in her selection as an organizational representative to the Climate Justice Alliance’s 2019 membership convening and to the 2020 Empower Kentucky Leadership Cohort. During her senior year, she worked as a teaching assistant for the Political Science Department where she helped students learn about the collective action problems facing the environmental advocacy community today. She spent her summers working on immigrant justice and Latinx issues with Washington D.C.-based national advocacy organizations including United We Dream, the National Immigration Law Center, and the Latino Victory Project.

She hopes that her environmental justice work with the Pew Charitable Trusts will advance her previous immigrant justice work by helping combat environmental degradation that could result in the displacement of frontline communities. Berenice plans to pursue a career as an attorney working at the intersections of environmental, immigration, labor, and criminal law in service of the immigrant and coastal communities that molded her.