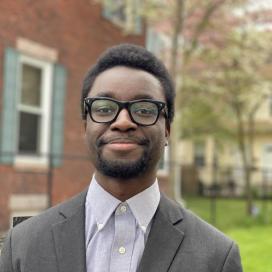 Dakoury Godo-Solo (he/him/his) is a Policy Fellow at the Electrification Coalition (EC). Dakoury recently graduated from American University with a B.S.in Environmental Science paired with a minor in Japanese.

Dakoury’s  passion for energy was first sparked during an internship at the U.S. Department of Energy’s Office of Energy Efficiency and Renewable Energy. The DOE was where Dakoury was first exposed to the complexities of the US energy landscape. His time at the DOE served as a crash course in energy and energy efficiency. In the years since, Dakoury has developed a diverse set of research interests that include but are not limited to: the nexus of energy efficiency and resilience, microgrids, and city planning for a more equitable energy future. The nexus of energy efficiency and resilience is of particular interest to Dakoury. So much so that he, alongside former DOE colleagues, authored a paper on the ways in which resilience and energy efficiency can complement and contradict each other.

In addition to his energy research, Dakoury has conducted research on global food systems. More specifically, he has served as a research assistant examining the future of blue foods in the US. During undergrad, Dakoury also examined how a plethora of factors: climate, socio-economic influences, and agriculture may affect cocoa production in his father’s homeland of Côte d'Ivoire.

Dakoury is incredibly excited to be working with the EC’s policy team. When he’s not in the office, Dakoury can be found biking around DC, cooking, and reading folktales.