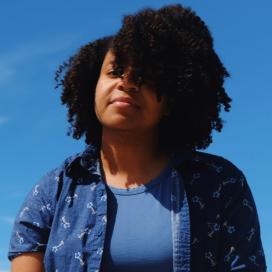 Kalina is a senior RAY fellow from the 2019 cohort. Born in the Central American country of Belize and raised on the Caribbean island of St. Vincent and the Grenadines Kalina moved to New York where she received her Bachelor's degree in Environmental Geoscience from the University at Buffalo (UB). During her college career she was able to work in the Office of Sustainability at UB and in the summer of 2017 she interned at the Caribbean Community Climate Change Center in Belmopan, Belize.

Kalina shifted her focus to cultural issues and became an event planner at The Garifuna Heritage Foundation in St. Vincent and the Grenadines where she was able to not only learn more about her history but also help educate others. Later she worked as a Procurement Intern within the Government of St. Vincent and the Grenadines where she gained insight specifically by assisting in the Regional Development Vulnerability Reduction Project funded by the World Bank.

Kalina became a RAY fellow the summer of 2019 with Ocean Conservancy's (OC) Climate Program working in their field office in Santa Cruz. During her time at OC she participated at both the state and international level. Engaging with California's Ocean Protection Council and had the opportunity to attend the United Nations Framework on Climate Change 25th Conference of Parties in Madrid, Spain. Her primary focus at Ocean Conservancy was to research the intersection of ocean, climate and justice.

Through her time with OC as a RAY fellow Kalina was exposed to world of ocean policy inspiring to her to pursue masters at University of California's Coastal Science and Policy master of science program fall 2020 to Spring 2022. Kalina hopes to further her work in justice issues with particular focus on coastal communities. In the summer of 2021 Kalina will be a fellow at Green 2.0 helping to explore the relationship between coastal communities and NGOs. As a watchdog and recordkeeper in the environmental sector, Green 2.0 seeks to better understand how NGOs are working in and with the communities they vow to support.