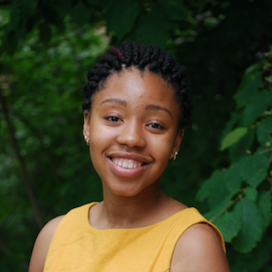 Ki’Amber was born and raised in San Antonio, Texas. She is the eldest of 5 children and of nearly 30 grandchildren on her mother’s side. She is a first-generation college graduate of Pomona College with a Bachelors of Arts in English and in Environmental Analysis (Environmental Justice concentration). She is a Doris Duke Conservation Scholar at the University of Michigan’s School for Environment and Sustainability (SEAS), a program aimed to diversify the conservation field by supporting and developing students from traditionally underrepresented groups. However, Ki’Amber did not always consider herself an environmentalist. She first became interested and invested in environmental issues when she took an Environmental Science class in her senior year of high school. Through this class, she strongly connected to issues of food and water access. She began to understand her own personal experiences of food insecurity in her neighborhood and became inspired to conserve water where ever she could. Once she got to college, Ki’Amber became involved in her school’s organic farm, became a leader in her school’s fossil fuel divestment campaign, took courses that grounded her thinking in different theories related to justice, environmentalism, race, class, gender, and sexuality, and did internships focused on environmental and social justice. Two of her greatest accomplishments in her undergraduate career were co-founding a Prison Abolition organization and writing a thesis on prisons, policing, and pollution, which brought together her passions for environmental justice and prison abolition. All of these experiences inform her goal to continue working toward environmental and social justice.

Ki’Amber is currently an intern at Freshwater Future, where she developed a pilot youth education water testing program and community lab in Flint, Michigan. Through this internship, she has created curriculum for and trained 11 high school students to collect water samples to conduct lead testing and develop their communication skills, and did the on-the-ground logistical and creative fieldwork to develop the program. She is thrilled to be a part of the Ocean Acidification team at the Ocean Conservancy in D.C. this year through the RAY Marine Conservation Fellowship. In the Fall of 2019, Ki’Amber will be applying to PhD programs. Her research interests include the intersection of environmental justice and incarceration, food security, water access, and black geographies.

Everything that Ki’Amber does she hopes to bring back to her community and find ways to give back. She gives gratitude to her mom, aunt, grandma, and the West Side.