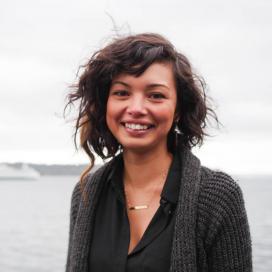 Melia Paguirigan grew up in the small state capital of Olympia, Washington. Surrounded by the beauty of the Olympic National Park and the Salish Sea. In high school, she became fascinated with the interactions between organisms and the environment. This early fascination flourished in college where she ultimately graduated with a Bachelor of Science in Ecology from the Evergreen State College.

At the end of college, she participated in a Research Experience for Undergraduates at Moss Landing Marine Laboratories through California State University Monterey Bay. Her research focused on the influence of diatom morphology and aggregation on the carbon cycle. She presented this project at the WSN 2016 conference and at the ASLO 2017 conference as a member of the ASLO Multicultural Program.

After graduating, Melia worked for a political non-profit, NARAL Pro-Choice Washington, as a community organizer. While on the front lines of the reproductive rights movement, she learned the importance of community led change.

She now organizes with the Young Leaders Committee at a people of color and low-income people led, grassroots organization called Got Green that works for environmental, racial, and economic justice in South Seattle. Her time with them focuses on connecting with the community to build a Just Transition in Seattle.

Melia is also a producer for The Story Collider with other RAY Fellow 17’, Emi Okikawa. Together they produce and host live storytelling shows that feature true, personal stories about science from diverse storytellers, whether or not they identify as a scientist.

In her free time Melia enjoys comic books, camping, cooking food with loved ones, and searching the internet to see how people bring together art and science (especially with diatoms). Family is very important to her and they have been essential to her achievements so far.