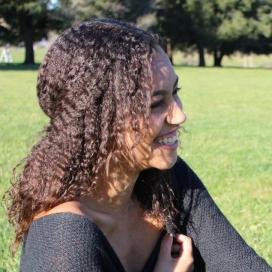 Marja G. Diaz is a Stanford University graduate (’16) with a degree in Human Biology and an Italian minor. She's now a RAY Marine Conservation Fellow and Digital Coordinator at Ocean Conservancy, based in Washington D.C.

Marja grew up along the beaches of Southern California, spending ten consecutive childhood summers with the LA County Junior Lifeguard program, and becoming as tan as humanly possible. Her love for animals led her to volunteer with the Westside German Shepherd Rescue, where she and her family fostered over 60 dogs (adopting their dog Zeus along the way), and later to volunteer with the Marine Mammal Center in Sausalito. Her interest in animal behavior also inspired her major of Behavioral Neuropsychology, in an attempt to understand why we do the things we do.

She is bilingual in both English and Spanish, and proficient in Italian – where she spent three months studying abroad in Florence, Italy. Her passion for travel, culture and language has led her to every continent but Antarctica (it’s on the list!), and inspired her love for photography. When not at work, traveling, working on her photography, or determining the ways in which human behavior can shape conservation efforts, she can be found indulging in her fourth favorite past-time – bad comedies.

Ultimately, she hopes to combine her passion for photography, film and science to spread awareness and inspire change for the current and future state of our oceans.