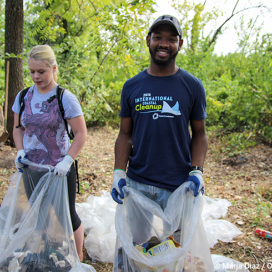 Eddie L. Love is a recent graduate from Auburn University (BS '15) with a degree in Wildlife Ecology and Management. At the tender age of 7 he realized his passion for conservation; however, growing up near the cities of Auburn, AL, and Atlanta, GA, created a passion for urban development as well. Spending countless hours analyzing cheetah behavior, learning about habitat encroachment and rooting for the ‘big cat underdog’ his fascination with cheetahs solidified his plans to contribute to the field of conservation. In the near future he wants to pursue a master’s degree in conservation with a focus on the urban-rural interface, to fulfill his dreams of creating a balance between human development and nature. He is a firm believer that mankind will not exist without nature.

In his previous work with the U.S. Forest Service, he focused on terrestrial and field work. The majority of his work included locating and protecting the nests of sensitive raptor species, most notably Northern Goshawks. He looks forward to bringing his current talents to the ocean front, and to gaining new skills.

In addition, rivaling Eddie's passion for conservation is his love for tennis. His personal goals are to become a professional tennis player, and to use his platform to encourage and influence others to fight for conservation. His goals are ultimately to bring greater awareness and effective management to conservation issues, particularly regarding cheetahs and human-environment interactions.