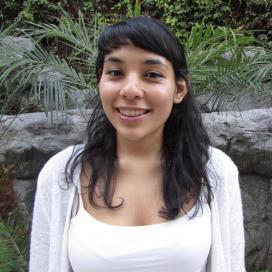 Azucena Lucatero grew up in Ontario, California among many cats and a younger brother. She switched coasts for college and recently graduated from Swarthmore College with majors in biology and Asian studies. From a young age, Azucena really cared for animals and felt responsible for their protection as well as the conservation of their environment. In high school, those convictions led her to participate in her school’s Green Team, promoting recycling and anti-littering. Later as an undergrad, she discovered her academic interest in ecology through her coursework and summer research experiences at the University of Michigan and Yosemite National Park. She has conducted projects in urban agroecology and small-mammal diversity, and she hopes to attend graduate school in the near future to continue her work in agroecology.

While at Swarthmore, she spent three years studying Mandarin Chinese, one of those semesters abroad in Taiwan. Now, she can (sometimes) hold a decent conversation in Mandarin. Azucena was also co-president of the Swarthmore Mariachi Band. She played percussion, violin, and sang—none of which she claims to have done very well—to create community, raise awareness about the immigrant experience, and debunk stereotypes about Mexico and its people.

A proud Chicana, feminist, and vegan, Azucena often uses her free time to lurk around tumblr and YouTube, exploring those facets of her identify and learning as much as she can about the intersections of the social struggles she and others face. Azucena is kept motivated by a strong desire to give back and empower her communities. She also enjoys reading good novels, laughing at her own jokes, cooking, and eating very spicy food.